Accept
More Information
Use of Cookies
This site uses its own and third-party cookies to offer a better experience and service to the user. By browsing or using our services, you agree to our use of them. You can change the cookies settings at any time.
LIST OF WORKS 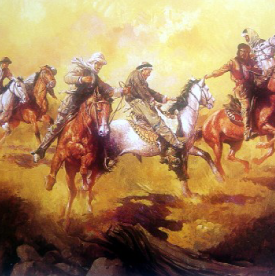 Personal opinion
As in the "Warren Stories" I varied the graphical technique according to the story, from the pencil, to ink black and white or washed in oils.

Plot summary
ARGON the Savage, is a character with which I wanted to contrast the mentality of a primitive man with extra-sensory powers and a modern world, technified and cruel, with which he has to face to survive. A mixture of Fantasy and Science-Fiction. On the first album I was responsible for the script and drawing, in the second the script was written by J. Mª POLLS.

Plot summary
It was a new formulation of a didactic children's book that I developed in the collection that I created for AFHA, "Science and Adventure". The key was to combine a classic adventure with a theme of scientific connotations, in this case, the human body's defenses against invasion of microbes that create infections. The central character was a white blood cell, Captain Leukocyte. This work is the forerunner of all those that were subsequently released "inspired by it" well in books or TV both in Spain and abroad.

Review
"FERNANDO FERNANDEZ, is an artist who has been talked about a lot lately. Spanish amateurs know him for his work for Warren of the USA, where he was awarded the prize for the best cartoon in 1975 . His experience as a painter and illustrator moves it into the world of comics with notable results, for AFHA he creates a collection of didactic children's books Science and Adventure, with a curious comic-pictorial narrative personality. One of these books KNOWLEDGE OF THE HUMAN BODY, has received an Honorable Mention from the Spanish Catholic Commission for children... " Manuel E. Darias, DIARIO DE AVISOS, Canarias 6.2.1977. "FERNANDO FERNANDEZ, is one of those rare authors who manages to engage the reader in a subliminal way. When leafing through a work of Fernando it is never forgotten, and, inevitably, some time after the reader discovers a new reading, in which he finds new things and interesting surprises. Fernando is becoming one of the strongest pillars of the current Spanish cartoon..." Manuel E. Darias , JOURNAL OF NOTICES, Canary Islands, June 1981.

Plot summary
It is a free but faithful adaptation of BRAM STOKER's text, which received by readers vote the 1984 Award "FOR BEST SCREENPLAY" in 1982, published by chapters in the magazine CREEPY.

Personal opinion
In DRACULA, in addition to sticking strictly to the text of the novel, I wanted to be faithful to the atmosphere of the time, reflected in a type of painting close to those prevailing in the late nineteenth century. The sheets have a quite regular composition, but following a characteristic of my style, are varied seeking not just balance but also the maximum expressive potential. The technical solution is oil on paper throughout the work.

Review
"Fernando Fernandez, a genius of comics, one of the most important authors that Spain has given, but as usual, is better known and appreciated outside the country than inside." PABLO M. MARTINEZ, Diario de León (five-column article, 16.10.1986)
"The most personal aspect of Fernández in DRACULA resides in the composition, the sense of the line and use of color. The painter's touch is evident at every turn, and the painter's vision, identifiable in each vignette ..." MAURICE HORN, NY, April 1984

Plot summary
The intent of the collection "Un uomo una aventura" in thirty works by different authors of the publisher Bonelli was to contextualize a history of the "adventures" genre in a defined historical setting, in this case I chose the war in Cuba (1898) to perform my job, which had some difficulties due to the lack of existing documentation that could be checked at the time.

Personal opinion
The treatment given to these plates is rather "classic" both in the text and the graphics, performed with pen and brush.

Review
References to THE MAN OF CUBA are found in most magazines, newspaper articles and reviews of books and encyclopedias that mention my professional work.

Personal opinion
Stories of own production, script and drawing, and of which I only yielded the local reproduction rights. A novelty for the time specially considering that such a deal was accepted by an editor as WARREN. However this work over time has been generically called "Warren Stories". Technically diverse, both narrative and plastic, I used materials as diverse as oil, cane tip, it was a fun field of experimentation that I conducted between working on covers and illustrations for the U.S. market.

Review
The story ADIOS MI AMOR, ADIOS…, was WARREN Award 1976 (best artist-writer of the year 1975) and CITA has recently been recognized in USA as one of the top 20 stories published by all authors in all magazines belonging to WARREN publishing during the time it was publishing.
They are quotes to these works in the "Diccionario del Cómic" Larousse Ed, 1994, "Diccionario de Uso de la Historieta Española" Jesus Cuadrado, 1997, "Y nos fuimos a hacer viñetas", Javier Coma, 1981, "Historia de los Cómics" J.TOUTAIN Ed "Los Cómics de la Transición", Francisca Lladó, 2001. "Contemporary Graphic Artists", Maurice Horn, USA, 1985, etc.
"The popularity of Fernando, for every good fan of comics, comes from years, especially since one of the most prestigious magazines about comics that are published in the world, the Italian LINUS and ALTERLINUS, published a series of twelve of his stories. Fernando is part of the new generation of Spanish comic authors, that create adult argments with a deep social, political and cultural sense, as well as being educational ... "Faustino A. Arbesu, EL COMERCIO, Gijón, 21/01/1976.

Plot summary
Series of illustrations in which I had total freedom. In some of them I employed for the realization both gray watery (of ink or oil) and manual weft pen. A job that left me very good memories.

Personal opinion
It was made ​​with a soft inking for a posterior coloring with watercolors and anilines on blue test, commissioned by my daughter Eva.

Plot summary
Satiric humor about the human condition and the socio-political situation of the time, up to the limits allowed by censorship.

Observations
Covers made ​​by direct commission of the Editor, and others produced by own iniciative and marketed in the Syndication section of the Selecciones Ilustradas Agency. Some works are painted in oil and others with mixed tecnique, namely acrylic or airbrush and also oils, on paper. Some have served as covers to known authors such as Stanislaw Lem, Ray Bradbury, Arthur Clarke or Isaac Asimov.

Plot summary
Science Fiction story with script by Victor Mora for Ediciones B, which remained unfinished due to problems with the editor. Only 16 pages were created.

Plot summary
In an undefined time in the future a society of women living in HIVE, an artificial world orbiting a dead Earth. In a routine inspection visit to the planet, Captain ZORA uncovers hibernating bodies of men who moved to HIVE. From here rush events, the origin of the human race was a secret held by the ruling military leadership HIVE for centuries. It triggers an internal struggle between two factions, while ZORA first discovers the meaning of love between man and woman. ZORA and AMON with a small group of warriors flee to Earth and discover ROBINSON the only human on the planet and the ship that can provide them with a future beyond the stars.

Personal opinion
In ZORA I used a formula that I had experimented with in short stories. To achieving a different composition for each plate. In a study of 8 or 12 pages it had its difficulties, but doing it in a long story of 96 plates was a challenge. For a year and a half I was devoted both to the composition and to the rest of the performance, but years later I must confess that I feel satisfied, it was worth it. Zora is perhaps the only work of its kind that has these characteristics. In ZORA is also implicit, from the first page, a tribute to the great forms of my admired GAUDI.
The FULL COLOR PERFORMANCE consists of a wide range of painting and drawing techniques, as in them are alternated or combined images painted in oil, watercolor, gouache, acrylics, markers, dyes, ink, pencil and chalk, used with pen, brush and airbrush.

Review
The publication in Spain won the C.A.H. Award and the Award for the "best realistic drawing" of the Diario de Avisos, Canary Islands.

"From a wide array of artistic procedures, covering all the range from pencil to oil, arise the ZORA vignettes, illustrations open to more fertile imagination, framed in varied compositions of curved geometry, that suggest us together with nostalgic and lustful environments, reminiscences of the artistic movements of the early century, a futuristic society far from the cold techno-science, a romantic and fantastic world ... "
CONTEMPORARY GRAPHIC ARTISTS, Maurice Horn, Ed Gale RC Detroit, USA, 1985.