Accept
More Information
Use of Cookies
This site uses its own and third-party cookies to offer a better experience and service to the user. By browsing or using our services, you agree to our use of them. You can change the cookies settings at any time.
FRIENDS AND FAMILY 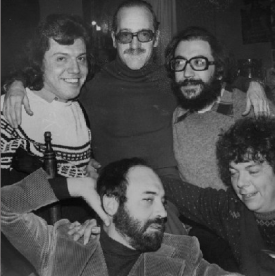 I've always considered myself a doubly lucky man, because in addition to being able to develop the work of a lifetime devoted to a vocational profession, I have been privileged to count among my friends and accquaintances some of the most brilliant artists of two generations (60s to 90s) of Spain and abroad.

Currently I am honored by the friendship of most members that constituted (and still survive) the "golden age" of the SELECCIONES ILUSTRADAS Agency of Barcelona, and whose vicissitudes of the profession is described in my book MEMORIAS ILUSTRADAS (Ed. Glenat, Spain). I have a family of artists, my wife ROSA LLEIDA was illustrator and cartoonist and now paints, like my children HÉCTOR and EVA.

Now and then I have lunch with the "Macabich boys" in Santa Eulalia, or the group of "painters" in Sant Cugat del Vallés, or dinner with "Carlos Gimenez's intimate friends" at a Mexican restaurant in Sants.